How hard can it be? It’s just a wedge, maybe a 9-iron, for the best players in the world, right?

Factor in wind, water, nerves and a giant gallery, and No. 17 at the Players Stadium Course at TPC Sawgrass is so much more than the yardage on the scorecard might indicate. With its green perched atop wooden bulkheads above a lake, No. 17 is one of – if not the – most famous holes in golf.

While PGA Tour pros normally would tear apart such a short hole, the scoring average on No. 17 during the 2021 Players Championship was 3.23, almost a quarter shot over par, to make it the third-toughest hole versus par on the course that year.

So what gives? If you’ve been fortunate enough to play the course – ranked No. 1 in Florida on Golfweek’s Best list of public-access courses – then you already know. If you haven’t played it, you owe it to yourself.

Here are five things to know about course architect Pete Dye’s most iconic hole – if you can give credit to that famous designer after all.

Listed at 137 yards on the scorecard, No. 17 requires a carry of 132 yards to the front of the green, and it’s 158 yards to the back of the putting surface at its deepest.

Thanks to a yardage book provided by StrackaLine – maker of such guides for thousands of courses around the world – we can see it’s 141 yards to carry the pot bunker that sits on the front right of the green. It’s 149 yards to the general area where the flag is often tucked on the right side of the green for Players Championship Sundays.

The green features a bowl on the front, with the slope behind the bowl as steep as seven degrees in places. A ball simply won’t stop there, making it a backstop for shots hit the proper distance, forcing the ball back and down toward a flag on the front of the green. But carry the ball one step too far on the tee shot, and that slope becomes a massive pain, forcing players to carefully judge their putts from the middle or back of the green and down into the bowl.

The toughest section of the green to hit is the back left. When the flag is on the top plateau near the boardwalk, players must carry the steep slope toward the green’s front, then get the ball to stop quickly, all without going a few steps too far and over the boards into the lake. Especially if the wind is blowing, it requires a precise shot. If the green is playing particularly firm and fast, it’s that much more difficult to get a ball to stop up there. 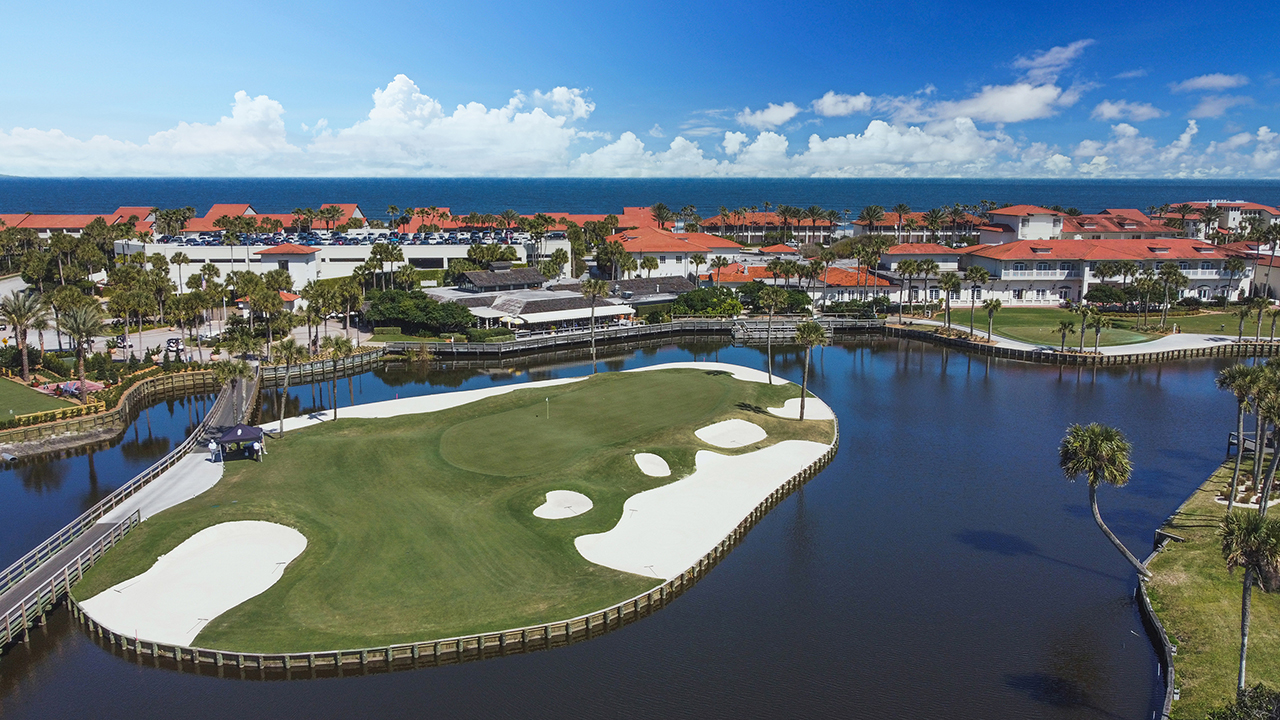 No. 17 at the Players Stadium Course is without doubt the most famous island green in golf, but it wasn’t the first – not even on this stretch of beach on Florida’s northeastern coast.

That distinction goes to Ponte Vedra Inn and Club’s Ocean Course, where the island green on No. 9 is less than 3.5 miles away from the No. 17 green at TPC Sawgrass as the crow flies. The Ocean Course was designed in 1928 by Herbert Bertram Strong and renovated over the decades by Robert Trent Jones Sr. and Bobby Weed.

The ninth at the Ocean Course plays a tad longer at 157 yards than No. 17 at the Players, but it features a much larger target with multiple bunkers and even a bit of fairway-height grass at the front of the island. It’s not as difficult as the 17th at the Players Stadium Course because there is much more room to miss, but it still gets the heart pumping over the tee shot.

The Players Stadium Course is one of Dye’s most famous courses, but did he design the 17th? He gave credit for inspiration for the island green to his wife, Alice, who was a great amateur player and often helped in his designs.

“Alice provided a sounding board of good reason in all the projects the couple worked on, and Pete had profound respect for her judgement,” former PGA Tour Commissioner Tim Finchem said in a statement after Alice’s death in 2019 at age 91. “She was an iconic figure; her humility may not have allowed her to think that, but it was true. Alice Dye was an icon.”

When Pete was digging up dirt to build spectator mounds at the Players Stadium Course, which was constructed in a swamp and required a lot of earthmoving, he was wondering what to do with a giant hole left after so much sand was excavated. Alice surveyed the scene and had an idea, likely influenced by recent rounds at Ponte Vedra Inn and Club. 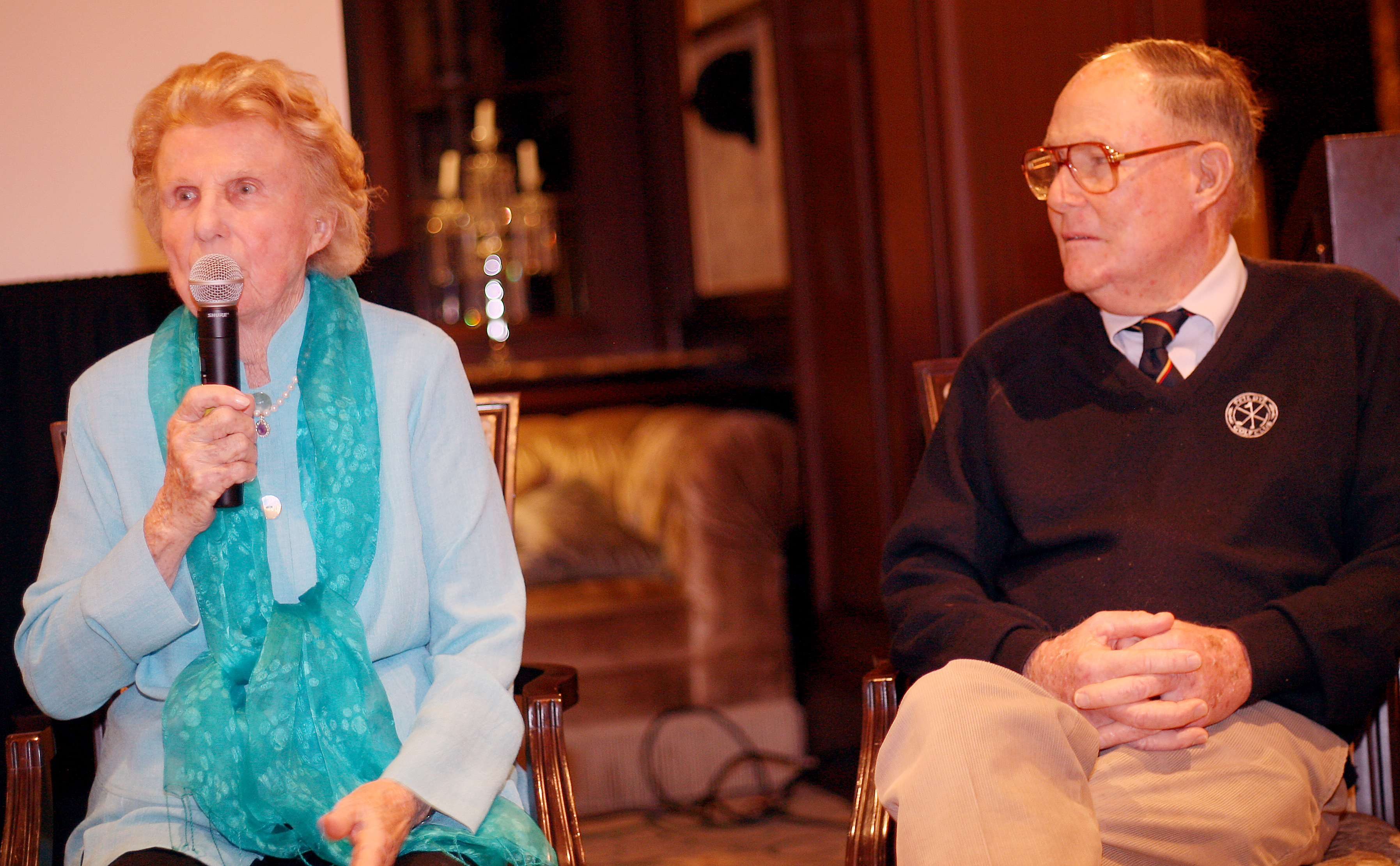 “She said to me, ‘Throw a bulkhead out in the middle of it and put some sand and dirt on top of it,” Pete Dye said, as recounted in Golfweek writer Adam Schupak’s book, “Deane Beman: Golf’s Driving Force,” that details Beman’s quest as PGA Tour commissioner to build the course. “A light went on, and that’s exactly how it (happened).”

The rest is history.

It’s estimated that more than 100,000 balls end up in the drink at No. 17 each year. The vast majority of those, of course, are splashed down by amateurs during regular resort play. But the pros are in no way exempt.

This article originally appeared on Golfweek.

TaylorMade’s tricky Halloween video will keep you guessing (maybe not the...

A glimpse into a parallel universe was provided by Phil Mickelson’s...

Nerves get the best of this Pro at Sanderson Farms

Is LIV Golf closing in on a TV deal with FOX...

ClickitGolf was founded and developed by golf enthusiasts just like you. We love golf and we get it – and like any golf nut, we like to spend our money on the latest & greatest golf stuff. Whether it be for a special occasion or just wanting to treat yourself to that new driver or that hot new product that was just introduced at the annual PGA Golf Show. Our goal is to continuously showcase a combination of golf news, traditional golfing merchandise along with innovative, cutting edge golf technology.
Contact us: support@clickitgolf.com
© COPYRIGHT 2022 And Beyond. CLICKITGOLF.COM
Go to mobile version