Tiger Woods wrote a captain’s blog for the Presidents Cup’s website and it was about what you’d expect.Until the very end.He talked about learning lessons from the Americans’ lone cup defeat in Australia in 1998. And looking forward to seeing how his rookies would perform at Royal Melbourne. Standard captain stuff.But check out how he signed off: 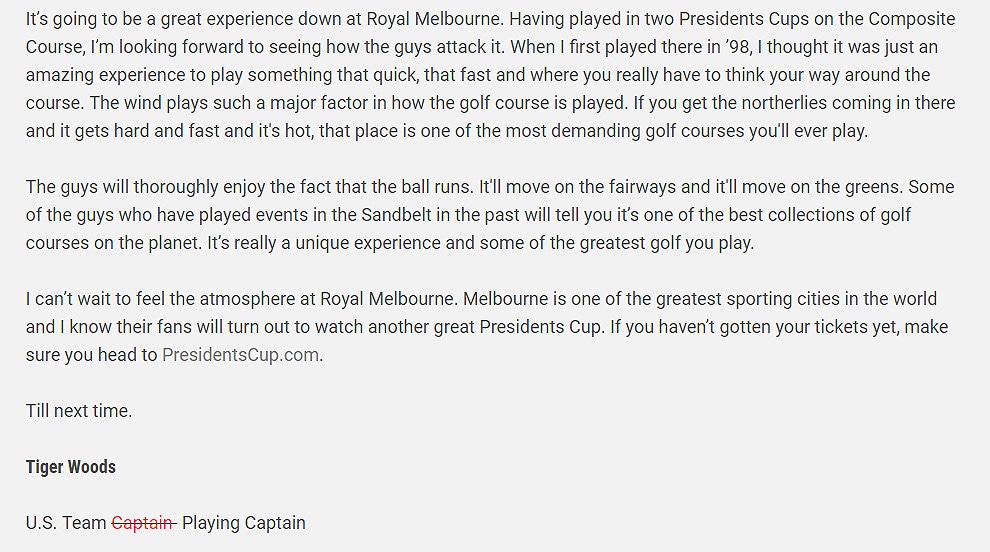 Eight players have qualified for Woods’ U.S. team and he has four captain’s picks remaining. Woods, the Masters champion, didn’t automatically qualify for his own team, but it appears he only has three decisions to make.

While Woods apparently has decided that he himself would be a “best fit,” his other three choices will be tough indeed.

* Fowler: Seven top 10s last season, with one coming at the Masters and another at the British Open, but he’s just 6-10-6 all-time in Ryder Cup and Presidents Cup competition.

* Finau: Top 5 finishes at the Masters and British Open and closed the season strong in the FedEx Cup playoffs, but his international experience is limited to last year’s Ryder Cup (he went 2-1, however).

* Woodland: This year’s U.S. Open champion. Has never played in the Ryder Cup or Presidents Cup.

* Reed: Went on a late-season tear and finished ninth in the FedEx Cup playoffs. Also 11-5-4 all-time in international play, earning the nickname “Captain America.” But his public airing of grievances about his playing partners after last year’s Ryder Cup — he told the New York Times that Woods was his “second choice” of playing partners, among other things — may be a strike against him.

* Mickelson: Had a simply dismal PGA Tour season apart from a win at Pebble Beach early on. Also lost both matches at last year’s Ryder Cup. Still, he’s 25-16-13 all-time at the Presidents Cup, and he and Woods seem to be on pretty friendly terms at the moment.

* Spieth: An all-over-the-place season was salvaged only by superb putting (Spieth ranked second on tour in strokes gained: putting for the year). He’s 15-9-3 in international play.

This year’s Presidents Cup doesn’t start until Dec. 12, so Woods has plenty of time to choose. It just seems as if he has 25 percent less choosing to do.